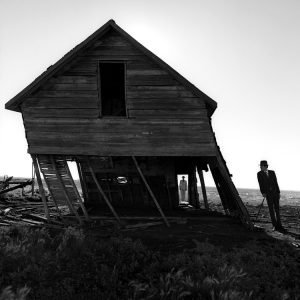 Greetings.  At this moment, I’m feeling a little less abandoned than this picture, but not by much.  The spread reads, “Forgotten but not gone.” This picture was shot about 50 miles west of Calgary in the very rural farmland.  It’s a somewhat recent picture.  What strikes me about this picture is the integration of architecture, landscape, and figure.  I need to digress momentarily to talk about my early years as a photographer.

In my early twenties I shot mainly portraiture and landscapes.  For some reason I always found my self attracted, or pulled in, to getting very close to people. This translated visually in my early years to photographing people face to face. I didn’t use a long lens to get close to somebody.  I would physically be close, and ended up photographing people mostly from the waist up. I never used long or short focal length lenses.  It was always a normal lens. If you want to get close to somebody or something, don’t stand far away.  I would either shoot close up portraits of people, or shoot landscapes. I rarely integrated the two.  Ironically, rarely was there a sense of place in my portraits.  See below an early example of my portrait and landscape work.

Over time, and for a number of reasons that I will discuss at a later date, I began to integrate landscape photography and portraiture.  This picture is a good example of this integration of architecture, landscape, and the human element.  There is something about the disintegrating building that makes it a very important—if not the most important—part of the picture, as strong or even stronger than the figures.  This is a very modern example of years of shooting landscape, figures, and architecture, and integrating them all into a simple composition that all feels right.

People often ask how I found this particular location.  The way I found this location is indicative of how I go about doing everything.  Two days before the shoot, an assistant, the art director, and myself drove hundreds of miles looking for appealing locations.  I happened to pass this place the day before the shoot.  I knew immediately I could shoot a picture there. I didn’t really know what the picture would be, but I knew that I liked the building.  I realized the picture had to be shot first thing in the morning, before the sun emerged from behind the building.  We planned this to be the very first shot of the day.  It was probably 6:00 or 6:30 in the morning.  The sun is directly behind the building, right on the horizon line. In another hour or two, the shot would be impossible. As always, finding the right location is the single most important aspect—and the most challenging—in creating a photograph.  It is often days or weeks of work to find the right place.  After that, making the actual picture comes rather quickly and easily.