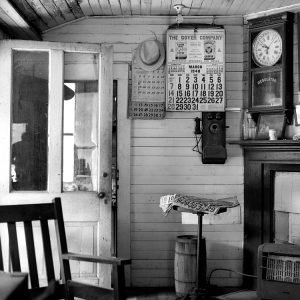 While photographing in the Mississippi Delta in the spring of 1977, I was lucky enough to live for a few weeks in the small town of Merigold, Mississippi. Saying it was small is an exaggeration, tiny perhaps is more appropriate, with no more than a few hundred inhabitants, clearly delineated by the railroad tracks.

The Chinese had built the railroad under the white man’s supervision in the 19th century, and to that day each of these small delta towns had a Chinese family living there, owning the only General Store. They were clearly the decedents of their forgotten, immigrant parents. Seeing these Chinese people speaking with an American Southern accent, was one of my introductions to the peculiar place I was living.

On the one side of the tracks lived the white families and on the other, the mostly impoverished black families. There was cordiality among the population, but there was clearly a separation and distinction. The power and money coming from the cotton and rice plantations owned by the white families, and the labor and toil coming from the black families who lived across the tracks.

Quite honestly, I did not come to change or even question the political landscape. I had no dreams for the impoverished black families or hopes for the white families. I came just to feel the life of the place, to understand it’s ways, and often without prejudice one way or the other. I am a little ashamed of myself but this is the way that it was for me.

Everything moved at such a slow and steady pace. It was hot, dirty and tired. Everything was overflowing with dust. The cars looked as if they hadn’t been washed since the day they were bought. The dogs were perpetually napping, and life had it’s own slow meandering style. There were many roads that led to the ubiquitous sadness that permeated the entire history of the region. One could feel it. One evening while having dinner with a major local plantation owner, I found myself wondering if twenty years ago he would have been head of the local Klu Klux Klan. He still had enormous power and presence in the community, and you could sense that if he needed something done, it probably would be. He had a fond distaste for Northerners, but was obviously amused or confused by me and seemed to take a liking to me.

At this same dinner, he invited me to photograph, if I wished, at his other plantation which was originally owned by his wife’s family. I immediately said yes and he told me that on the way I might like to stop at Booga-Bottom for a plate lunch. He gave me directions, as the luncheonette owned by Mrs. Owens was hard to find. It sat at the crossroads of four plantations in the middle of cotton fields. The establishment was far off any paved roads. We arrived at twelve and exactly on cue; twenty or thirty huge columbine tractors arrived. The white men walked inside and sat at a long red-checkered table, while the black men sat outside on the porch. We were all treated to a great plate lunch of pork, chicken, collard greens, okra, iced tea and all the fixings, served by two enormous black women. This was an America that was as foreign to me as the interior of Africa. Afterwards we continued on to the Bend Plantation.

While scouting around, I noticed this small building that was completely boarded up. I could just peek through a small hole and I asked about the building to one of the managers. He told me that the grandfather who had owned the plantation had died in March of 1948. This building had been the commissary and his office and upon his death had been boarded up and closed and no one had been inside since that fateful day in 1948.

Being my usual, aggressive, New York self, I asked if it might be possible for me to go inside. He said to my surprise that he thought it would be fine and he had some workers come over and start to disassemble all the boards that had been slapped in place so many years ago.

Later I came back and as I slowly opened the door and began to walk inside, I could feel myself slowly entering the past. Nothing had been touched in the room since the day he died. It was exactly as it was in 1948. Even the air felt old and forgotten. I can remember perfectly this feeling of somehow tricking time, of stepping backwards into another world, another place, a different era. It was so hot outside, yet so mysteriously cool inside.

The blues of The Delta, the songs of sadness and remorse were here as well. The Delta blues were on both sides of the track.

If You Come To A Fork In The Road, Take It.