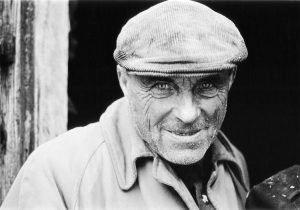 In May of 1980, I remember driving along this small windy road in North Wales, and seeing around the corner this extraordinary larger, though somewhat decrepit Manor House.

As was my fashion, the larger and more forbidding the house, the more curious I was, and as usual I found myself in front of these large gates, trying to find some way or someone to let me in.

Of course, my wife, who was extremely shy and reticent, was cringing in the back seat with my son, begging me to leave well enough alone, and mind my manners.

I would hear none of it, and finally noticed an elderly man slowly making his way to the gates.

He seemed quite happy to find someone to talk to, in this very deserted forbidding place.

He kindly let us all in and told me that he had been the caretaker of the house and property for over fifty years. The house belonged to a prominent, Scottish, whiskey family, where their children and grandchildren had abandoned the house for London. He told me they might come once a year to go hunting, but would never stay in the house.

He was very kind and quite content to talk with me. I told him I was an American photographer living in Wales and would love to look around and see if there was something I might want to photograph.

He graciously obliged my request and off we went on a journey of a lifetime. It was in this small journey through the history of this house and of this man that my life would radically change, and new questions about life and existence would be raised, that to this day have yet to be answered.

So he very kindly started the tour first in the large house. It was extremely cold, musty, and feeling forlorn and abandoned. If a house could speak, this once majestic house, which at one time stood proud and beautiful, would now be crying. It had been forsaken, and had the presence of being haunted with memories and terrible feelings of sadness.

We were on the balcony of the second floor and I mentioned this observation to him. He immediately stopped, rested his hand on his forehead and said it was ironic that I should bring this up at this place. For it was exactly fifty years ago, his first year as the caretaker, during a lively party in which the family was hosting their neighbors, that their young granddaughter fell from the place in the balcony where I was standing, and immediately died upon impact.

From that moment forward the life of the house, the family and its descendants took a terrible turn for the worse. It seems as if the young granddaughters death took the life out of the family and the house. Life seemed to have stopped at that moment and all events that occurred since then were filled with so much unhappiness that the house would, soon, if allowed, collapse upon itself, destroying everything within it. I have never felt the presence of sadness so strongly as I did in that house.

If there ever was a house haunted by it’s memories and feelings, this was the house. I could feel some strange, sad presence.

After the tour of the house, we went outside happy to be relieved of the interior of the house, and the caretaker casually mentioned to me that he had found an ancient well near where we were standing fifty years ago. I asked him how he discovered it. He told me that he was dowser. I had often heard that people said they could find water with young fresh cut twigs, but I told him I did not believe that this was really possible. He smiled and walked in the nearby woods and cut some twigs into the shape of a Y. He told me to hold the two ends in each hand and walk across the grass, as he knew this was where the water line entered the house.

I took the stick from him and walked slowly over the place he mentioned; yet I felt nothing. I told him this and he came over, took the sick from me, held it in his hands and said for me to now try it. As I walked across the grass again the stick almost jumped out of my hands. It was so powerful that if I left the spot the entire twig would bend violently toward the direction of the water. I asked him what happened. He said he had given me the power and now I had it. I had never experienced anything like this before. I felt this uncanny, other worldly, powerful force within these tiny twigs. It was far more powerful than me. I had felt something outside of me, yet it was within me. Unknown to me it was a day of reckoning, a day of death and life like I had never felt before.

P.S. I never took one picture there. This story is the picture. The picture above is of a farmer in Wales down the same road, taken on the same day. This is as close to the original experience as I could find.

The Family Epic, Part Two: From Here To Eternity