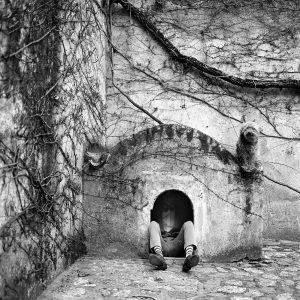 In the matter of two years, my life, at the age of five or six, went through significant trauma and change.  One would think at my current age, post-traumatic syndrome would have worn off.  But despite years of therapy, I am very familiar with the symptoms but only vaguely clear of the exact cause.

The best I can remember, at age five or six, was that I was on top of the world.  We lived in a modest house on a comfortable street with many children my age.  Despite my size and weight, I remember acting strong, powerful and happy.

Then it all becomes a blur.  My mother, in 1953, was diagnosed with breast cancer at age 31.  I of course do not remember this, but what I do remember is a woman who doted and cared for her young son, disappearing.  She went off to bed for a year or so, isolated, alone and depressed.

You must remember, my father was in the fashion business where looks triumphed over character.  Where life was evaluated by appearance.  I guess for my mother, the stigma in the early ’50s of ones worth, beauty and attractiveness had been destroyed by her illness.  She was complete before and now something fundamental was missing.  This illness affected her for the rest of her life.  People did not discuss these issues publicly, nor privately, in the 1950s.

So in conjunction with my mother’s illness, my father went to work harder and basically disappeared from the family for a few years.  My mother and father both left me alone with the help.  Over a short period of time, he became much more successful and within a few years, we moved to a very large, grand house with lots of property and no one around.  I was even more alone than before.

At the same time, as my mother and father were renovating this house (this must have been my father’s attempt to bring my mother back to life), he surprised me with buying the two dogs, Golly and Frypo, which I described last week.

They became my best friends.  It must be noted that then, and to this day, I sleep with the door open.  In those days, I felt very isolated and had become more and more fearful.  I needed and wanted a way out.  I was slightly claustrophobic and for all these reasons, would never be closed in a room with all the doors shut.  (To this day, I am still frightened of elevators, which feel contained and like living coffins, to me).

Anyway, one night at about three in the morning, I woke up and was hardly able to breathe.  I couldn’t see more than three feet in front of me.  I was terrified and somehow was able to find my parent’s room and wake my father.

He immediately got wet towels for all of us to put over our mouths and was able to find his way downstairs and open the front door.  He called the fire department and somehow everyone else in the house was quickly awoken.

Golly and Frypo were trapped in the basement and everyone in their concern forgot about them except me.  I tried to run into the house to open the door, but the fireman would not let me go in.  Instead, I told them where they were and the fireman went in and brought out two very scared and shaken dogs.  All of us, luckily, survived this ordeal.

In the end, we were all alright, but we were told within another half hour we may have died of smoke asphyxiation.

The next day I went to school as a hero.  It would be one of the few days over the next years where I felt confident and capable.  As time went on, and I lived in this large, isolated house, it was often Golly and Frypo that would help bring me out of my room.  Somehow, these dogs and myself having gone through this experience had created a bond that was original to the three of us.  It’s hard to explain how dogs and humans understand each other, but together we always tried to help each other out.  For a young boy in need of attention and love, Golly and Frypo were a good part of the solution.  They would bring me out of the dog house to play and once again be happy.

How Blue The Road Less Traveled