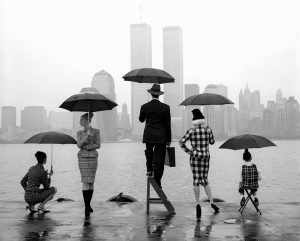 Many years ago, I was commissioned by  The New York Times magazine to do a series of pictures referred to as The Line Pictures. I did three in total and this one was called Skyline, 1995.

The only art direction I was given, was that they wanted to shoot a picture with the  New York skyline in the background. How, when, where, and even the why was left to me. The wardrobe was styled by The Times, but other than that everything was produced and created by me.

I remember that I kept thinking, “If only I could be in the middle of the river on a large enough platform this picture would work.” Finally we found a barge company in Staten Island which had the perfect barge (a floating dock) that they would tow for us.

Even though I was shooting directly east, I wanted to take a chance and shoot early in the morning; directly into the sun. Luckily, my favorite weather occurred and I didn’t have to deal with the sun as a heavy mist and grayness had settled in upon us.

As we maneuvered into location, I was informed that the barge could only hold that spot for a few seconds; the current was just too strong. So while the barge was making large circles, we quickly dressed all the models.  Just as we were finally beginning to get into location, it started to rain harder.

Like everything else I shoot, it looks very contrived and in a way it is. The fact that I knew the exact location I was going to shoot was very unusual for me. Right before we got there I did not know how or where I would place the models. In fact, As I started to place the models against the background, I realized we were one short. It was at this point I quickly asked the stylist if she would be in the picture. She agreed and we quickly dressed her and placed her in the far left of the picture. Since it was raining now and very cold that November morning, we shot very little film. Between the rain, the weather and the drifting barge, I was lucky to get this one frame where everything was in the right place.

This picture has become an icon; particularly after September 11th. It is hard to imagine New York without these towers, though I must admit, I so disliked them visually.

Not only did we loose these architectural giants with thousands of people, but America has seen even more lost since those days. Along with the loss of these towers, America continued it’s loss of optimism and  innocence, which was so beloved to me.

This picture was shot before the millennium, where I thought perhaps something wonderful would happen. A new enlightenment in the arts. A return to a more optimistic and revived spiritual calling, a reunification of body and spirit.

But unfortunately, this has not happened. We have drifted off into rancor and self-involvment and the arts have followed suit. They have not provided anyway out of our malaise but only a mirror of who we are today and where we stand. To look at the art and ourselves at this time is not pretty nor helpful, it just continues to drive us further down the wormhole of despair.

So on these days before Thanksgiving, I offer you a chance to leave this vision behind and  to reflect on what is wonderful about our life and to consider that there is great potential for us all. That after the Fall and Winter of our Discontent, comes a new Spring full of happiness, hope, and joy.

Happy Thanksgiving to you all.

How Blue The Road Less Traveled