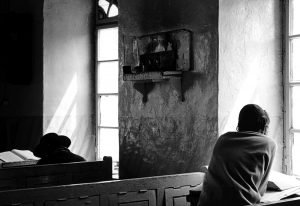 Many years ago, when I was just beginning as a photographer, I received a wonderful and unexpected gift: a fellowship to live in Jerusalem for close to 100 days.

I’ve written anecdotes about some of my experiences and thoughts about this period in my first book, which is entitled In the Land of Light, and Elie Wiesel was kind enough to write an introduction, but there are still a few thoughts and stories which to this day that resonate with me, which I feel somehow reflect upon my pictures today, which are quite different visually, but are still similar in their intent.

I remember some years ago looking through a book of Cartier-Bresson’s photographs entitled The World of Henri Cartier-Bresson, published in 1968 (to this day remaining one of my favorite photographic books) and being curious about what picture he had chosen from Jerusalem for this publication.

As I found the one picture in the book taken in Jerusalem, I immediately recognized the spot in which it was taken. I realized at some point during my stay in Jerusalem I had been there.

For some time, I could not remember why this place was so familiar, because for me the location was of little importance in Cartier-Bresson’s picture.

One afternoon as I was under construction in my home, I was discussing with someone about how what lies behind the walls is as important to me as what lies outside. As if struck by lightning, it came to me. I now knew about the place where Cartier-Bresson had photographed years before me.

You see, we were both standing in the exact same spot, but it had taken me some years to realize that we had taken two totally different photographs from the same place. He was interested in what was transpiring on the outside, and I was interested in what was illuminated on the inside. You see, I was standing right in the doorway in Cartier-Bresson’s picture to take the picture you see above.

Today, my pictures perhaps look less concerned with what lies beneath and within than they did when I was young, but don’t let the clothes fool you. I am still putting together the pieces, organizing the puzzle that is me, and looking as deeply as ever in my pictures, at a life that has to come from somewhere within.

PS: If anyone is interested, a few new copies of In the Land of Light, published by Houghton Mifflin 1983, are still available at the studio through my website here. This book is long out-of-print.

PPS: I’m off to drink some Sangria, relax my tired bones, and go to an exhibition of my work in Spain. The blog will return and reunite all my disassembled parts in two weeks from today. Buenos noches and good luck. Praise the Lord, for now I hear