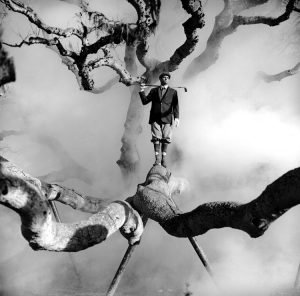 Today when I look at this pictures I smile to myself. But, it recalls a time when I was all but smiling. They remind me of a small part of a much longer story. The game of golf paralleled my relationship with my father as a high school boy. Today I miss him a great deal, and would love his company, but then… that is another story.

My father did not participate much with me or my activities, but he was an avid golfer, and if I ever wanted his attention, I had to learn and attempt to play this peculiar game.

There was one small problem. After hundreds of lessons, thousands of hours at the driving range, I could never rid myself of a frustrating and definitely inappropriate slice to the ball. (For those unfamiliar with the game, this means the ball despites one’s efforts and determination to hit it straight, and would veer off to the right with such a vengeance, that one could only feel someone else’s hand at work.)

The more I would try to adjust for the slice, the most voracious and unforgiving the slice would become. The battle between the boy and this little ball was never resolved. In fact, as a means to outmaneuver this veer to the right, I would almost hit the ball directly left in order for it to go right, hoping that in the end, this would allow it to go straight.

One glorious Saturday afternoon in the Summer of 1964, my father and I, by some miraculous good fortune, had managed to be tied for first place in the annual father and son tournament. We were on the 17th hole and my father felt it neccessary (with the sniff of victory in the air) to put even more pressure on me, imploring me to hit the ball straight. Of course the more he persisted, the further to the right the ball would travel. I could have shot the ball backwards, and with its ruthless determination, the ball would have veered far far to the right.

As might be expected, on the approach to the 17th green, there was a large pond to the right of the green, where I immediately launched my first ball, right into the center of the pond. On the second attempt, I was almost lucky: the ball veered so far right that I almost overshot the pond which would have landed the ball in the far right fairway of the next hole. This crazy little ball had a mind of its own. It would go where it wanted and not where the master had directed.

Needless to say, we lost that tournament, along with my clubs, that I thanklessly threw into the deepest part of the 17th hole pond. I have never seriously played this game again, but I must thank it, for helping me accept the course I have chosen. I learned that hitting the ball in the wrong place definitely has its advantages. I had disappointed my father, but I had begun to find my own destiny. Ironically, these years where nothing could go “straight and narrow” helped me focus so that now, with a master golfer’s attention, I can drive my camera right down the center of the fairway.

“I Never Sang for My Father”

The Rise And Fall of The Smith Reich, Part One