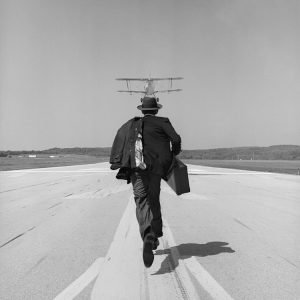 I think what comes to mind when I look at this picture is the Platonic notion of what is real. This really wouldn’t have been as complicated an issue 10 to 15 years ago, but today photographs are not even accepted as admissible evidence in a courtroom. There is an almost universal assumption today that a photograph has been altered in some way.

One afternoon in Paris, a man walks up to Picasso and asks him why he paints the way he does. Picasso replays that he does not understand the question. The man opens his wallet and takes out a family portrait where the people are depicted in a traditional manner. Picasso replys to the man “You mean I should paint people thin and flat?”

Many of the photographs in this book represent, in small fashion, the notion of what is real and not. They are an attempt visually to play, and not necessarily accept reality as we traditionally accept it. My photographs are often my attempt to come to grips, to accept or not, to enjoy or reject acceptable notions of reality. As one confronts, participates, or co-creates in this world, I have searched its limits and found…?

As pertains particularly to this picture, I have enough awe, wonder, and confusion in the world as it is, to visually leave it alone. I do not retouch or alter any of the pictures. What you see is 95% what was there. The fun is to play with the making of the picture, rather than its alteration.

This was simply a lucky moment in a generally lucky day. Sometimes I am not so lucky. I am often chasing things… light, locations, time, etc. For once, I was able to get to the right place at the right time.