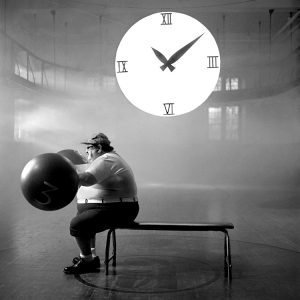 For many years I had tried, to no avail, to get an assignment where I’m allowed to use heavy-set men as the subjects. I have always thought that heavy-set men with a certain amount of style carry themselves in a way that lends itself to really wonderful photographs. However, in today’s culture, there is a formula that men and women must fit into: only certain types of bodies are beautiful and therefore only certain things are construed as handsome or beautiful, elegant or not, appropriate or inappropriate. But I disagree.  Take, for example, the great Italian designer Gianfranco Ferré, who had this incredible air of quality about him.  There was something attractive about this person, much more attractive than some skinny 20-year-old male model who looks vacuous and empty.

Finally, the New York Times Magazine assigned me to do a photograph on exercise.  I immediately thought of this person, Marshal Efron, who is a great character actor. On one hand, the photograph is playing with the idea of this very heavy-set man exercising.  While that is somewhat funny, and it may be one reason why this photograph works, it is not the part of the picture that I like the most.

Marshal Efron is someone I find very interesting.  He is not only strong of character and strong of will, but he is strong of personality as well.  I have found that people who generally don’t look the part—who don’t have the proper decorum, who aren’t traditionally handsome or beautiful, who are slightly outside the vernacular in one way or another, be it physically, mentally or emotionally—are generally the most attractive to me.

Today I’ll leave you with a few pictures from my book launch party last week.  Thanks to all who attended.  We will have a book signing in December at Sotheby’s in New York City.  Hope you all can make it to this one as well.