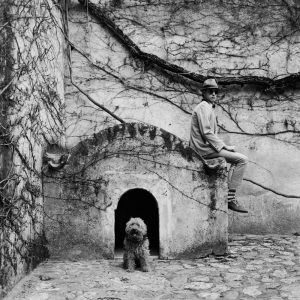 There are two types of dogs in the world that I’m aware of: there are Pooches, and then there are Woofs. This is a very important distinction, and has had a seminal and profound effect on my life. I am definitely a woof man. These are heroic, loyal, courageous dogs, that will protect and defend the honor of any young boy who has loved, fed, and smooched the woof on their noses with affection.

This all started in the Summer of ’59. My father, whom I have often mentioned with fear and admiration, had always, since I was born, decided that it was important for any son of his to have a dog; but not any dog. He chose the rarest and most unusual dog he could find: an English Sheepdog. He always wanted what no one else had. So from 1949 until 1959, we were either the envy or disdain of the neighborhood by having its only English Sheepdog, whose name was Golly.

In 1959, when I was 12, Golly died of old age. Unbeknownst to me, my father had decided, as he had acquired more wealth and power, to turn the business of a dog up a notch. He had somehow found out who had bred the original Shaggy dog, and decided that it was only fitting that the family should now possess the offspring. So one Summer’s morning on the beach, where you would usually find me and my father, he told me that it was time to go, and off we went in the family station wagon. This is a car he never drove, so I knew something was amiss. Off to Kennedy Airport we went (which in those days was called Idlewild) to pick up what he termed a “surprise.”

The surprise, to my delight, was not one, but two baby Sheepdogs, shipped from a kennel in California. Immediately, I named the one that looked the closest to the original Golly, “Golly,” and the other came with the name Frypo, which we kept.

These dogs grew into small Wooly Mammoths who were both funny and affectionate to me, but usually only me and the help.

My mother and my sister, who basically could care less about animals, were terrified of these two monsters, but I knew that true love was a bond between a boy and his dogs.

On occasion, as I was quite small and frail, I would trick my mortal enemies into chasing me home, only to be met by two of the largest and most protective animals they had ever seen. Don’t mess with a little boy who has two large dogs. I may have looked weak, but Golly and Frypo gave me strength.

As my parents were often gone for months at a time, it was Golly and Frypo who were my best friends. As they often had saved my body and limb from scary bullies, it was only fitting that I return the favor. Next week, I’ll tell you more of how I returned the favor and created a bond that would never break.

PS: Although the dog pictured above is indeed a Woof, he is not the legendary Golly.

Wade not into Unknown Waters

A Large Tick And A Little Tock