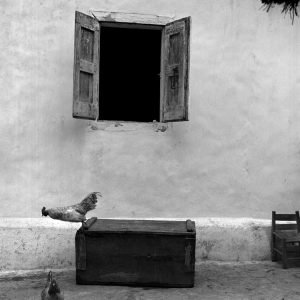 Good afternoon. This is my third attempt at being public. Once more into the wilderness of my eccentric mind.  This is another spread from the book.  I returned from Vancouver two weeks ago, having finished printing the book.  If I say so myself, it looks quite special. Here is another attempt at psychoanalysis.  I’ll focus on the picture on the right.

In my younger days, I had the opportunity to spend a number of months in Jacmel, Haiti.  This picture was shot in the small village of La Vallée on the top of a mountain, which is so characteristic of Haiti: place a village on top of a mountain and name it “The Valley.”

Haiti was like submerging myself in nineteenth century Africa.  The second I got off the plane, I was in a completely foreign place—a fourth world country, if such a thing existed. Existence was almost medieval.  Unlike the Mosquito Coast, you don’t have to travel to the interior to find subsistence.  It’s right there on the exterior. Introspection, if you’re interested in such things, can be accomplished without journeying inward.  It’s right there in front of you.

One of the great gifts Haiti provided me was the ability to see that even though the Haitians had next to nothing, they seemed extremely happy.  I couldn’t get over it.  Over the few months I lived there, their singing, laughing and graciousness continually amazed me. Despite their poverty, lack of health care and education, they seemed to not only subsist, but to persevere with joie de vivre.    How is it that we as a nation have everything, yet seem angrier and more depressed than a country that has absolutely nothing?

Shot over thirty years ago, this is one of the few pictures I shot in my early life that was a pre-cursor to my current work.  Most of my earlier work was quite sober and very serious, which fit my mood in my twenties and early thirties. This picture, however, seems to exemplify the humor, whimsy and slightly surreal qualities found in my later work. It’s a picture I still like, even thirty years later, which is rare for me. You don’t know if this chicken is leaping, or exactly what’s going on with him. I like the fact that things are deliberately slightly out of frame—the chair on the right and a little bit of tree above. I look at this picture and I think of the spontaneity with which it was shot.  For me, it’s my typical mixture of controlled and conscious composition with spontaneity. I walked into this little courtyard, and this chicken was standing on top of this box.  I got the camera ready, and just as I prepared to shoot, the chicken prepared to jump.  I waited and snapped this frame, the only frame. If I had waited any longer the picture would not have worked.  I like that quality to it.

Lastly, I think it’s important to discuss the medium used to create this picture.  This is one of the oldest pictures in the book.  It was shot over 30 years ago on Kodak Tri-X film. From the time I finished graduate school in 1973 to the present day, I have always been consistent in how I shoot. Regardless of the format—in the old days, it was 35 mm or 4×5, or contemporary times where I shoot 120—I’ve always shot on film, and it’s always been Kodak Tri-X or Kodak Plus-X.

There’s an old aphorism: “A change is not necessarily an improvement.” The digital world has changed things; however, whether it’s an improvement has yet to be seen. Digital photography is indeed a change, but not necessarily an improvement.  I happen to like film grain, when it’s controlled.  I like the atmosphere it creates, particularly in black and white film.  Digital pictures still seem a little sterile to me. I have to admit that the sharpness of a digital picture is rather attractive; however, there also seems to be a lack of atmosphere, a lack of soul.  For this reason, film has a great deal to offer. While I’m watching out of the corner of my eye the developments in the digital world, I still shoot everything on film.  If it’s black and white, it’s exclusively on Kodak Tri-X and Plus-X, which is my recommendation to any budding, aspiring, practicing, amateur, professional, reclusive or retired photographer.

The Family Epic, Part Two: From Here To Eternity