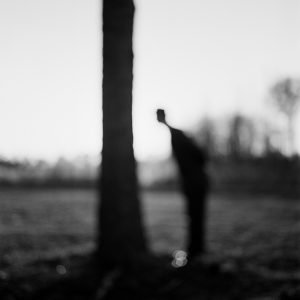 All good things must come to an end.  All my photographic life I was obsessed with the compulsion to make my pictures as sharp as possible.  When I was a graduate student, I would spend hours working with all different types of films and developers trying to get the acuity of a 4×5 camera into the composition and film size of a 35mm.  This obsession with sharpness was not just because it was titillating and fun, but because I felt that the camera’s eye had a greater acuity than my own vision; therefore, I was able to see clearer and sharper with the camera than with my own eye.   The camera was like an extension of my eye in and helped in my attempt to get as close—philosophically, emotionally, metaphorically—as possible to somebody or something.

And so, there was always this kind of dialectic: I always tried to see the world clearer and sharper, and as an end result it was never sharp enough, never clear enough, and never resolved enough.  It is probably what always pushes one forward, but it was always frustrating.  And so, probably in an ultimate attempt to kind of deal with it all, I decided to blur a picture. This picture, shot in 2001, is one of the early results of that.  Of course, it’s a lot easier to shoot like this than it is to shoot a sharp picture.

Stuck in the Mud